I picked up a beautiful stack of great pulp magazines in Black River Falls WI. at an antique mall a few years back looking for a china cabinet.  We got the cabinet on E-bay later in the year, but the guy had a nice booth of old magazines, a lot of Fishing and Hunting mags, but a nice stack of pulps, which I picked up a foot tall stack of including some magazine sized issues of Blue Book, including the fabled Ian Flemming James Bond issue, about which later.  The rest being some nice westerns and the issue below, which I wanted to read first. 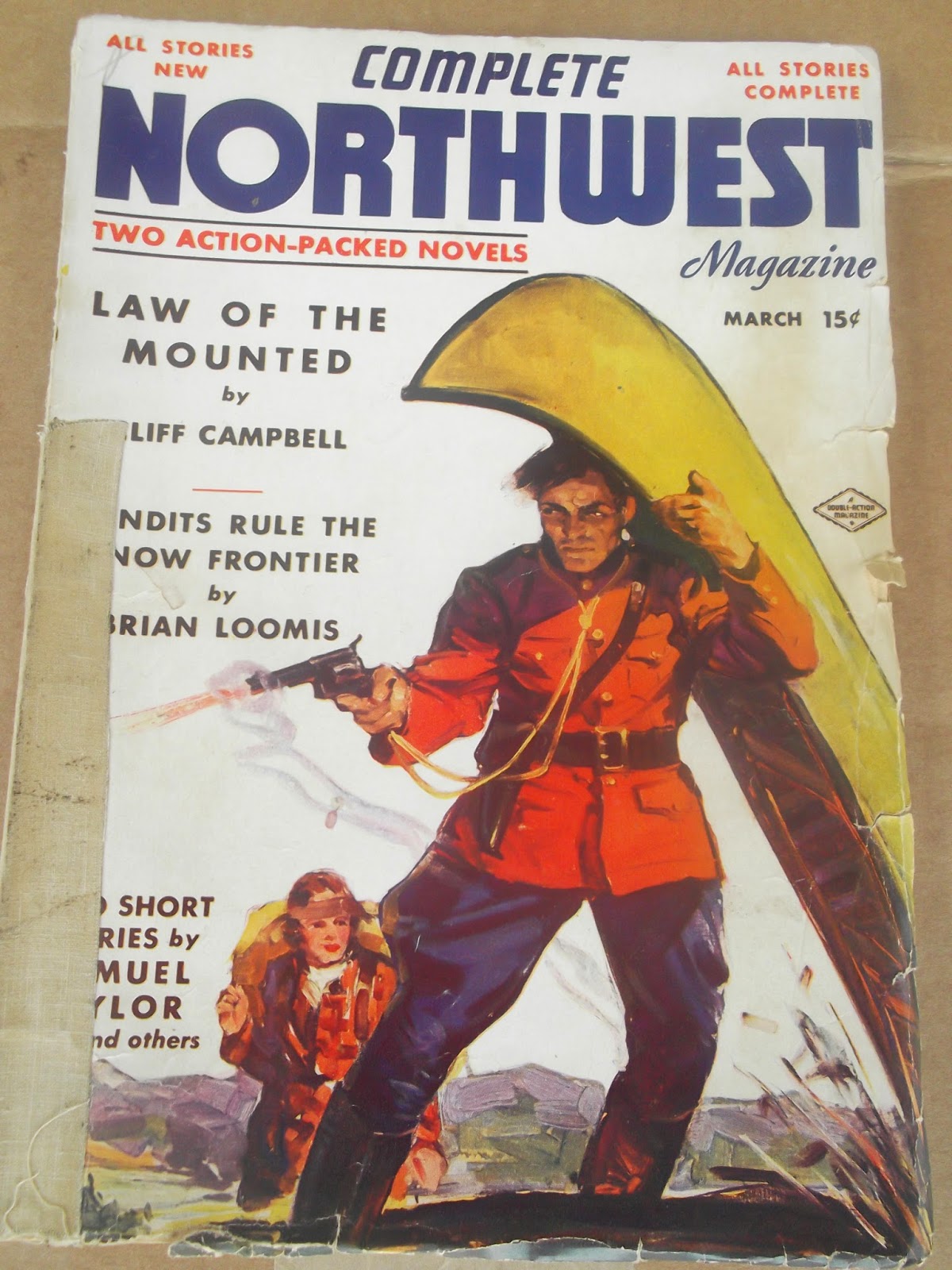 So, not the best of condition, the dreaded  athletic tape always a drag to get off, and I guess it will remain there forever, no back cover but complete and it was cheap too.  Its from March 1938 a Columbia Pub.  The cover is by an unknown artist, but I find it to be very nicely done, the painterly landscape at the bottom is very effective, OK, and the painting does not have anything to do with any of the stories as far as I can tell.  Well the Mountie does have a lanyard attached to his gun that the Cambell story refers to and it does have a woman featured in the tale, most the stories are set in the dead of winter so no use for a canoe.

The first story up is Law of the Mounted by Cliff Cambell is a excellent tale of just 6 characters who live and work above Arctic Circle, a very cruel place to be sure.  I like the way the story unravels itself and how the people in it come together and then dissolve away again.  Very nice flow and feel for them and he really does a wonderful job of describing the Circle and its sense of emptiness.  The story is a northern mystery and everyone seems to have a secret.  It was hard to put down, very  pulply as you would expect, but well written. I could not find out much about Campbell, the Fictionmags site does not list but a few stories. He is listed on the Statement of ownership as the Editor, but above the table on contents it lists Michael Ivan.  So don't know.

Next up is Bandits Rule The Snow Frontier by Brain Loomis a pulp writer of westerns and northerns.  This is a more modern tale of the Mounties involving cars vs horses.  He tells a nice believable story of how autos might help.  I like the fact that woman play a role in both these stories and are very much in the hunt to solve the problems involved.

The short stories here one by the hugely prolific Samual Taylor who wrote a vast amount of pulp fiction his story Gold Eating Wolves was OK, as was C V Tench's story Quits.  The better of the shorts is by Thomas Barclay Thompson its called Trail Breed a great dog story about how naturally the dog gets him out a fix.  Am a sucker for dog stories.  Thompson did not seem to publish much fiction, very little listed.  Silver Fox is the final short here is of a native and (again) his wonderful dog.  The k9 saves his life more than once.  Everyone wants the dog, but he wants to give him to someone deserving of him. As for the silver fox, you'll have to read it yourself!

The Statement of Ownership I thought was interesting, it lists L. Miesel ( Louis K Miesel's dad maybe?  The latter is a dealer in Photo-real art and I knew him from his pin-up originals he owned), Dave Gross and Louis H. Silbertket ( of Archie Comics, which he started in 1941 with John Goldwater).  And, as mentioned early Campbell as ed and managing ed.

A very decent mag a bottom of the barrel publisher, but I thought plenty good for 15 cents in the day!

Lastly, to add to my list of Lost Book marks and you can see my old ones by checking out my older blogs on the subject. 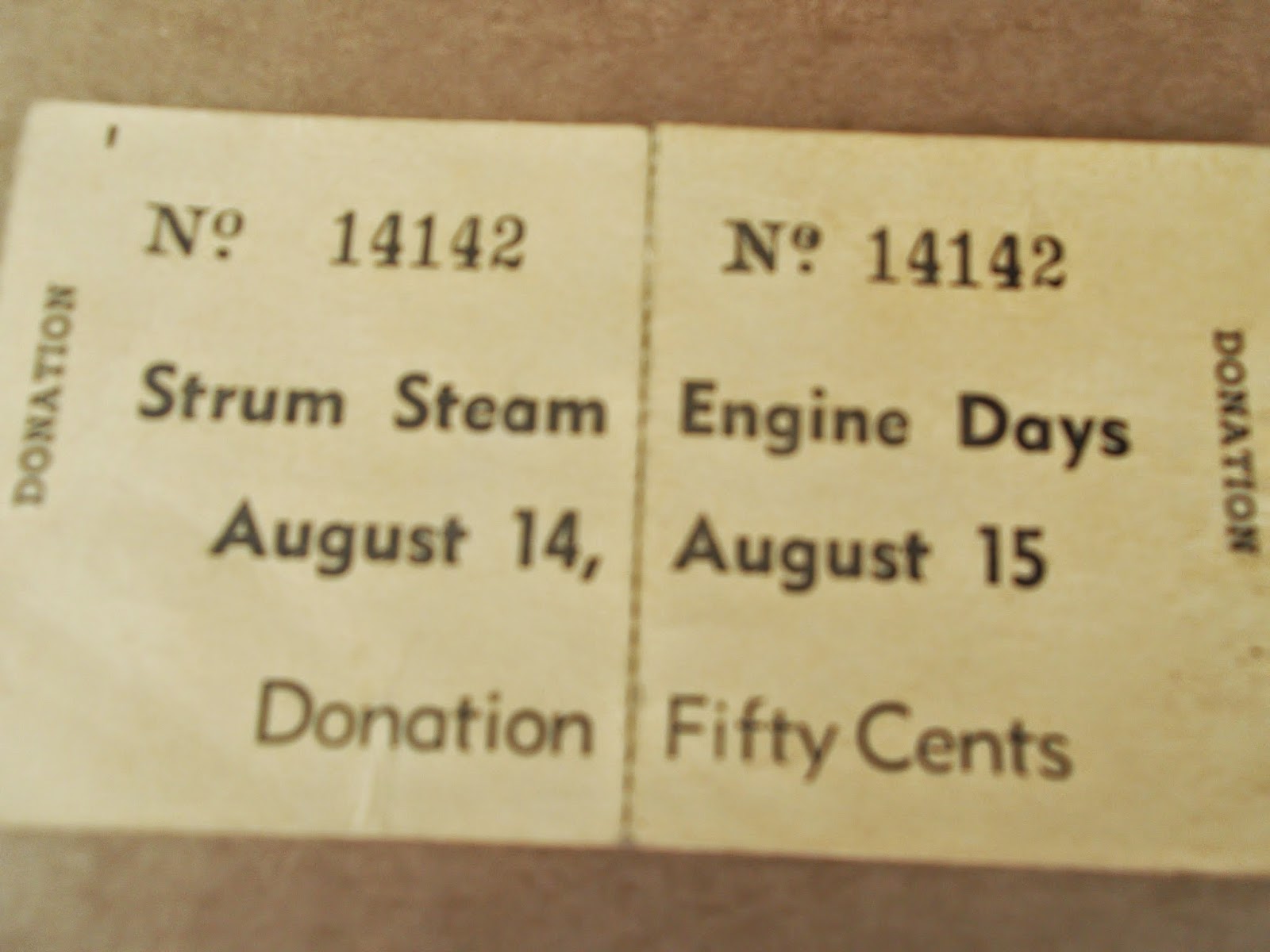 This one is kinda cool, it a ticket for Strum, WI's Steam Engine days, the town is about  30 miles from where I got the pulps in Black River Falls, WI.  I see a few things on the net about this fair, its at least been going on since 1964, but may go way back, under a different name.  Pretty cool steam tractor event.  This ticket may have been from around the days when the purchaser picked up the pulp, back in the thirties.  I think its pretty neat, looks as if he only got though the first story by Campbell where I found it!
Posted by Jonathan G. Jensen at 1:34 PM