A pile of Science Fiction reading...

Here's some items I picked up and blogged about a few years back, and finally got around to reading some of. 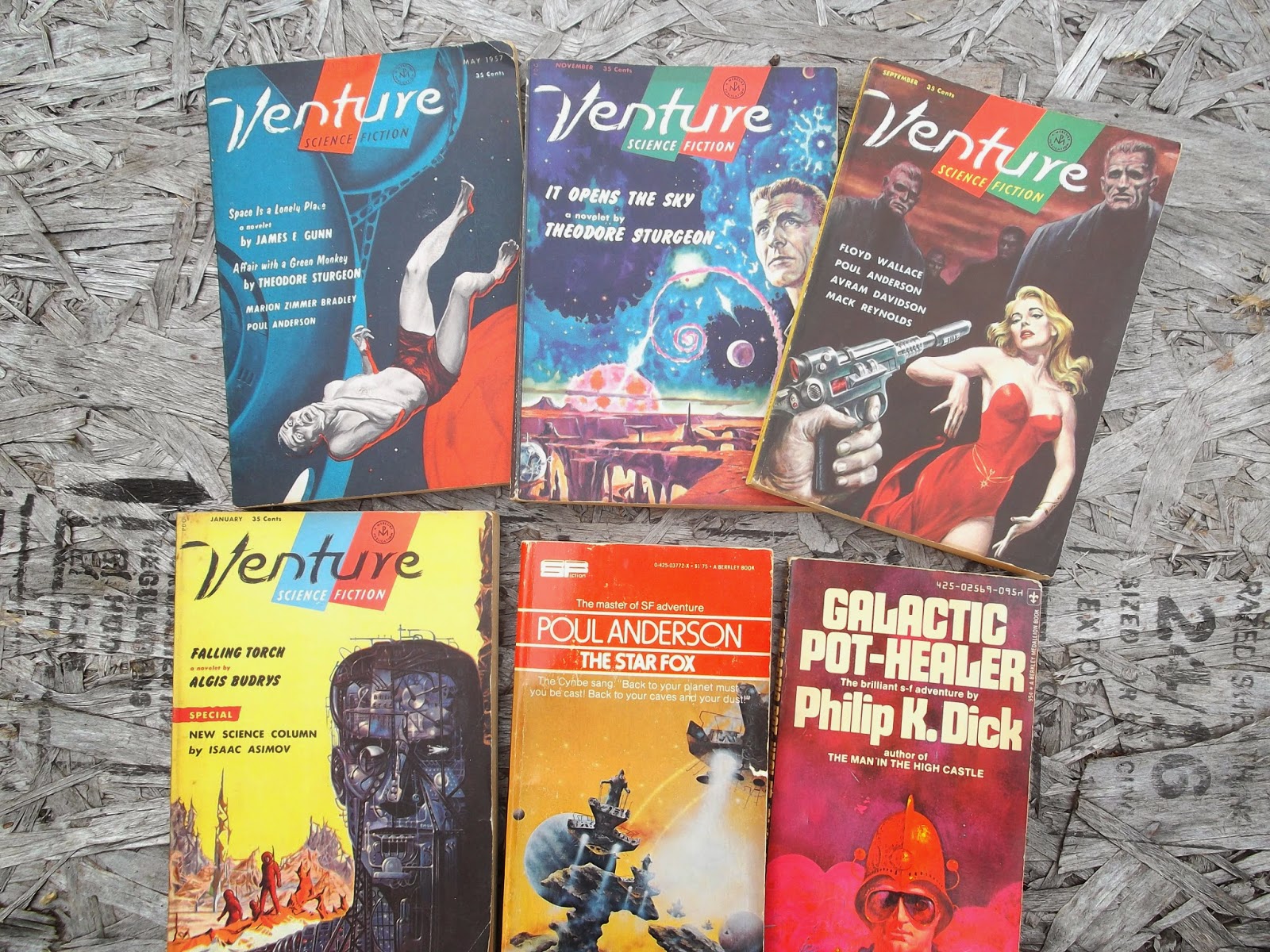 The paperbacks, I picked up at a Antique mall in WI,  a big box full for $17 cheap at half the price.

The Star Fox by Anderson was first published in The Mag. of Fantasy and Science Fiction, Feb.thru June 1965.  The book was cobbled together from the short stories in the FSF.  I had a great time reading it and others must have liked it also as it was nominated for a SF award, but wasn't a winner in '65.  The alien character ( Cynbe) is pretty cool and the kids of the story pick up its hair style, dances, and cloths, just like we did with the Beatles.  Or, at least as I did, pegged pants and Beatle boots, still remember them.  Ya gotta love fads!  The Tech is pretty spot-on I thought, he had cell phone, a desk Computer ( in the days of those giant IBM jobs I used to work at in the 70's), TV info-trive and other cool stuff.  Over all the tale is not unlike America's fight with England over independence.  Very good.

As for the Dick book Galactic Pot-Healer, its my first read by him, I wanted to read Do Androids Dream of Electric Sheep, but never got to get a copy.  Its one of my favorite movies, Blade Runner that is.  In any case its  a very well thought out tale unlike any other I have read.  The "Book" in the tale is very smart phone or tablet like, very cool as it turns out.  The work they do as a group is a beautiful thing indeed.  Dick must have like pottery very much!  Everyone should ( and most of you guys probably have) read this one.

The May 1957 of Venture has a nice cover by Emsh about the first tale by James Gunn Space Is A Lonely Place.  Its the last of a series of tales about what his idea of what space travel might be like.  I think he did a very good job of visualizing space from what appears to be the space station ( like ours out there now) in a family oriented situation.  Another interesting mention is the stove they have a "shortwave" device, very cool, almost a microwave, hey?

The next story The Corpse In Your Bed Is Me, by Walter M. Miller and Lincoln Boon.  I generally like Miller's stuff, but don't like SF stories about Comedians.  OK, it takes place in 2045 and there is a Martian in it, but not very good SF.

Night Sky Of Venus by Erik Fennel is my kind of tale; an excellent description of what Venus might be like.  And, Mike the main character who comes of age there with the planet and native people.  I very much like Fennel's  Storytelling style.  He had some tales in two my favorite pulps, Planet Stories and Blue Book.

Cold Victory by Paul Anderson has a great title and seems to be another political SF tale, the other is Star Fox a decade later.  This tale is about 2 brothers who end up at odds with each other and how the story twists to fit it.  Interestingly told, but not my glass of beer!

Birds of Prey by Marion Zimmer Bradley is what I thought to be a superior bit of fantasy story telling.  The point of view of a woman telling a story though a man is pretty nice.  She is a very descriptive writer.  I will read more by her!  And, I have a bunch in the above mentioned box of books.

Finally by Theodore Sturgeon Affair With a Green Monkey, not my kind of tale, its rather strange story of a guy who knows whats wrong with this, what he thinks is a gay fellow, but is really not, as his wife finds out!  But, not like you would imagine.

Seems like a good SF magazine, but uneven, a good bunch of writers.