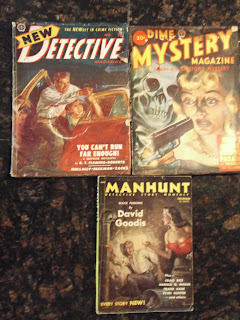 Charles Beckman Jr. stories from my collection, all good reads.  The first one I read was the Manhunt  Dec. 1953 a attractive cover by Uppwall featuring  the David Goodis story Black Pudding a story of revenge, a dish served cold.  A very good story about a guy who does time for another gangster and the gangster steals his wife and waits for him to get out and lead him to the loot.  The story by Beckman is Killing on Seventh St. a story of a man, who just lived his life until he's praised for killing a would be robber.  He finds himself turned on by what the hood does to his wife and you know where that leads... Seems a bit like the Spicy pulps when you read Manhunt.  There is another story here called Wife Beater by Roy Carrol, with a strange twist, not unforeseen, but, another sexual tale of the Spicy variety, heck makes Spicy Detective reading seem tame at times.

The next story from Detective Tales April 1952 with the distinctive Norm Saunders Cover, has the Beckman story A Dead Mans Chest a short story about another guy who gets out a jail and  looks for his hidden treasure, but is beaten to it in a strange way by his partner.  I like his hard boiled writing, and his locations, like Corpus Cristi, TX. of which Charles knows something about, being a native.  Nice details like his study of sea shells, adds to the story.  Beckman works a lot into  9 pages.  He was well respected by the editor at Popular Pubs as he did get cover credit.  The interior art is excellent, none signed, but I think a lot of it is by Gerald McCann who you can look up at David Saunders fine site Field Guide to pulp artists.  McCann is a fine artist, who did work in the comics, like Classics Illustrated, and I have a lot of his work in Ranch Romances, which also features some nice art by Ray Kinstler, another blog sometime. Another good tale in this issue by Richard Sale Blind Ad for Murder, is very good, a great murder frame up.  Its a reprint from Detective Tales 1938, still a very good, hard to put down novelette.

The final story in the last issue of Dime Mystery December 1949 with the Beckman story Run, Cat, Run.   A Johnny Nickle Jazz tale, is an excellent short about a Jazz trumpeter, who records the greatest tune, the best of the best, and then it begins to haunt him...cool story.  There is a reissue of Honky Tonk Gal by Charles Beckman that has been put out by Wildside Press, that would be a good read also with Johnny Nickle.  In addition the Boeckman's his real name( and Patti his wife), have a book out featuring most of the above collecting all of his crime stories.
Posted by Jonathan G. Jensen at 8:20 AM