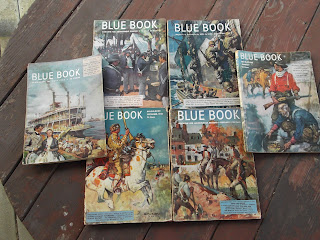 Here's the last batch of catch up pulps from my hunts around Wisconsin.  These came from a bunch of antique malls we looked at for a china cabinet, which ended up being bought on Ebay.  But the pulps were a nice find at the time.  Some of the issues came from a book store nearby.

The Riverboat issue(July 1946) with a Stoops cover is like all the other issues and has a wraparound cover, very nice depiction of the Mississippi River shipping port.  Just a fantastic bunch of stories all 144 bedsheet pages.

My Nephew Norvell by Nelson Bond  He twists the beard of Father Time and gayly shakes dice with Destiny. How can you beat a story with an intro like that?  A SF tale.  The Reluctant Rogue by Wilber S. Peacock, awesome illos by John Fulton ( who I'd like to talk about later on, in another blog.  I've talked to his grandsons and they have some neat stuff.) Its A Desperate adventure of that famous minstrel rapscallion Francois Villon.  I've read other tales with Villon and its great material.  Who would sell a farm and go to sea?  by Bill Adams, always good stories by a master storyteller of the sea.  H. Bedford Jones adds another tale of Red Sky over Theabes, another great storyteller, very prolific in Blue Book until the day he died 3 years from this issue.  I love these stories of Theabes and fantastic illos by Maurice Bower, I can't say enough about the art in Blue Book, OK. or the writers either.  Man, its a historical fiction piece on Egypt, The opening line is: The Sphinx Emerald appears again, shapes the destiny of Egypt, and again goes into hiding...Wonderful pulp reading.  The Watched House is by Allan Vaughan Elston, also sounds like a teriffic pulp read, As the police admitted Bill didn't fit the case. But when the money was found in his locker, he had to turn detective himself.  It goes on and on, The trail of the Crosses by Allan R. Bosworth with amazing 2 tone illos by Hamilton Green, etc.

The Union Army is May 1950 good John Fulton cover art, Road to Granada by Anthony Fon Eisen Gypsies in the 13 century, sounds good to me.  A Friend in Ghostland by one of my favorite female writers Beatrice Grimshaw.  She had some excellent tales in early issues of Everybodys mag. about pearl hunters in uncharted islands of the Pacific.  Bush Pilot by William Byron Mowery beautiful illustrations by Hamilton Green ( who I'll get some of his art up on a future blog also).  The story is a northern, a pilot in the wrong place.

The guy with the red shirt and rifle is an excellent cover of January 1949 by Benton Clark Great stories by Kenneth Perkins The Devil in Lucinda Jones, She could name the cards unseen... Cool sounding story.  Another Wilber S. Peacock Benevenuto and the Angel  An Artist goldsmith proves himself also an artist in steel and Roguery.  The Seven Tables of Justice by Walter C Brown Oriental Detective tales, with just terrific illos by John Richard Flanagan another artist I would like to know more about.

The Guy on the white pony is a cover also by Benton Clark for the Sept. 1948 issue.  I read this issue and found it an excellent read, even the war stories, some of which were based on true tales.  Hey and I paid a dollar for it too!  The Seventh Cavalry Staghound by Fairfax Downy was and excellent tale of the 1870'a,  Col, George Custer and his dogs!  Good storytelling.  The Minos Goes to Battle by Kenneth Cassens, The Ancient Cretans elected their rulers for 9 years and then put them to death, awesome story.  Really love his stories of historical fiction.  John D. McDonald shows up with a detective story called Nicky and the Tin Finger, a robotic shamus, good story.  Of course H. Bedford Jones puts in a story, The Gold Dust Wedding, Just great pulp writing.

The Army guys crawling down the nets is by Stoops for Sept 1945  A complete novel Blue Murder by L L Forman, Pilot Bait by Eustace L Adams, H B.Jones puts in Grotto of the Nymphs buried treasure, love it, my kind of story. The drawing are by Maurice Bower, good stuff.  The Phenomenal Casimir by Georges Surdez about his French boyhood, more Bower illos.  Night Fighter by Arch Whitehouse, a story of the Black Widows, great air fighter storyteller.

The last one is a John Fulton cover illo of Colonials for Feb. 1951 Toward the end of Blue Book as I know it.  Shield for Murder by William P McGivern, One crime begets another...A SF tale Beachead on theMoon, by Sidney Leland, great art too.  Black Magic by Nelson Bond.  The Viking Ship by John Clagett.  A tale of the Vikings, based on the ship they found in the Swamps of Oslo...

I could read Blue Book until the ends of the earth, but what fun would that be, when I have so may more styles of pulps to get to.  Next time the Westerns I got at the same bunch of stores! 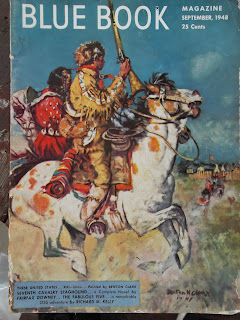