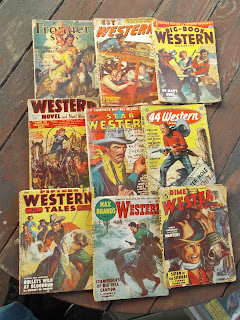 A few weeks out on the road turns up the following great reads.  There must have been a bunch of western pulp readers out there in the real world as I turn up westerns at Flea Markets, Antique Stores and where ever!  These 9 all came from the same Antique Mall in the same case, nice cheap readers.

Starting with my favorite on on the top.

Frontier Stories a Fiction House mag,  Winter 1953 the final issue, before Fiction House closed its comics and pulp door forever.  Its got a great lead novel story by Dan Cushman called Salvation Guns with awesome illustrations by Vestal.  What I like about the issue best is the cover by what looks like Alan Anderson, I would have bought that off the stands in a heartbeat!

The next one to the right is Best Western January 1953 a Red Circle Pub, a Martin Goodman  pulp with a wonderful Norm Saunders cover, action like that you can't beat.  It also has a lead novel by Lewis B Patten Called Man on the Stage, obviously the cover illustrates that.  It has a Harrison Colt novel  Trigger Trail of the XT and others.

The next one over is Big-Book Western Jan. 1953, a Popular Pub. Nice action cover, it contains 2 nice novels, No mans Guns by William Vance and, Mescalero Drums by John Jakes no less.  Looks like a great read, man, Jakes could write anything, SF, Fantasy, Mystery, and who all knows.

Star Western  Dec. 1945 with Cold Decked by Walt Coburn, others by Harry F Olmsted and Norman A. Fox.  All good writers and have read some of this mag before.  And, the interior art looks a lot like Everett Raymond Kinstler who did a lot of comics covers and interiors over at Avon.

Max Brands Western  March of 1953 Popular Pub, W H Scott Cover, odd that the guy wearing the star on his chest is the guy running away with the bank bag.  Very nice painting though.  Its a reprint mag with a bunch of good stories.

And Finally the Dime Western for Feb. 1949.  Gotta love the cover here and it contains Walt Coburn's Wanted!  Also George C Appell and Saten of the Sierras by Thomas Thompson.

Am gonna jump into the Frontier Stories or the John Jakes story when I get the chance.  Oh, and the same mall contain 5 Ranch Romances from the fifties which I may have to go back and get when I can, nice pulps but like the RailRoad pulps I've been seeing a bunch of lately, not high on my list.
Posted by Jonathan G. Jensen at 11:45 AM