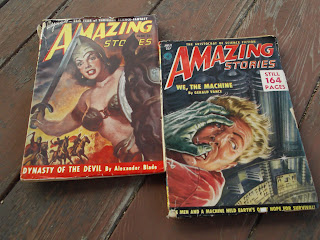 Yesterdays listing of item bought at a Antique and Collectables mall listed one side of the street, on the other side was another one and with this I found the following, and not westerns this time.

Amazing Stories for June of 1949, nice Arnold Kohn cover painting for the Blade story. Also some good stories by Guy Archette: Twisted House and another by Robt Moore Jones :The Land of the Golden Men.  Not exactly your hard to find items but nice to see in the real world stores. 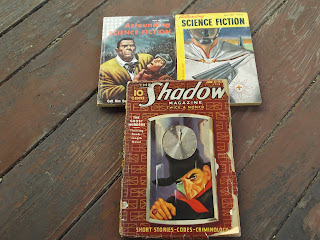 Amazing for July 1951 Joe Tillotson cover for We the Machine by Gerald Vance, also within a story by Frank Robinson : Good Luck Columbus!  Which sounds great. And, very interesting to me, interior illo's by Murphy Anderson and Dan Barry.  Both of my favorite comic book artists of the period.  Nice to see them doing work in another medium.  I once corresponded with Dan Barry back in the 60's as a kid and he did not seem to like his time in the comics at all, I guess his Flash Gordon newspaper strip time was more to his liking.  Wonder what he thought of doing pulp art?  As for Murphy Anderson, he did a ton of work for every publisher out there, a bunch for my favorite publisher Fiction House,  in Planet Comics, good stuff.  Of course my favorite stuff came later, Atomic Knights and inking over Infantino in Mystery in Space the Adam Strange Strip there.  Oh, and later came his work on Hawkman, all great.

Still later that week, I checked back at antique mall not far from me and have turned up pulps in the past, and found these items:

Astounding for Aug. of 1955 Cover by Freas and a novelette by Lester del Rey: Victory!

The Shadow Mag for Jan 1936 nice to see hero pulps turn up once in a while, OK, not the greatest of condition but a reader and not too bad of a price.  It features The Ghost Murders.

Here too, for some reason I found Railroad pulps for about 5 bucks each that I passed on, may have to start a Railroad collection if this keeps up....