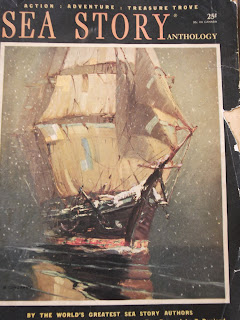 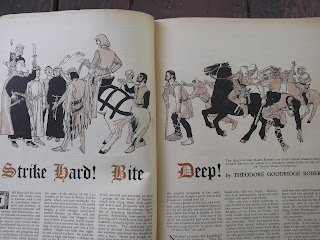 That's what I saw this week hunting up some pulps when I had some time.  I was at this antique store and notice the above looking out at me from a rack of magazines.  Being the good pulp hunter that I think I am, pulled it out to find this great mag.  Sea Story Anthology #1 and only, 1948, Street and Smith publication.  Filled with great stories of the sea,  and mind you some excellent western writers too!  Ernest Haycox, and Tom Roan are here as well as better know sea writers, Linclon Colcord, Albert R. Wetjen, and James F. Dwyer.  Most of the stories are reprinted from the 20's, but some good ones none the less.  I read the Roan story because I had to know how he would handle a sea tale, it does have a tendency to read like a western, right down to his use of the words savvy and gat (which is more like a later detective term, the story is hard to put a time to). Either way a good story.  The cover by H. C. Murphy, is an excellent painting, being that he died in 1931, was probably used on a early Sea Story cover.  The cover at one time was a nice slick paper, but after 64 years has faded somewhat.  The whole mag is printed on what looks to be coloring book paper and about the size too!  Dunno, I really like the bed-sheet size pulps like this.

And, speaking of  bedsheets, the mag, 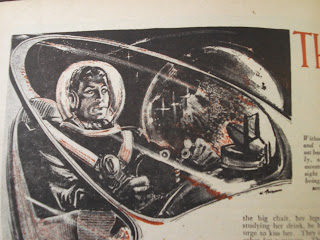 I found next to this was nice too, a Blue Book December 1947 it was a cover-less copy, but tucked into the mag was the cover!  And, just to set everything off the price on the Blue Book was Free!  OK, the price on the Sea Stories was $1, yup, a buck!  Man, can't beat that!  I just love these Blue Books, Bed Sheet size, cover by Stoops covering his states issues, this one on New Jersey.  The stories are  just amazing to me, I mean to start off with Theodore Goodridge Roberts' Strike Hard! Bite Deep!  The Quest of the Mazed Knight in ancient Britain/ King Arthur's day.  Its the first story I'm gonna read here and there are some others too. The illustration is by Frederick Chapman, very nice, he worked largely for Woman's Home Companion and The American.  Other stories here include Grandpa and the Werewolf by Georges Surdez, The Golden Cup By H. Bedford-Jones a cool looking story about clipper ships and the China Trade, but the most interesting story is by Ross De Lue called The Flight of the XS-102 a SF story with great illos  by Wilson Thomson, don't know much about him, or de Lue.  Should be a good read.  Finally in this issue, there looks to be a wonderful story by the prolific Wilbur S. Peacock  called A Gambler's Reputation with some great drawings by one of my favorite artist for Blue Book, John Russel Fulton, I can't look at Blue Book without thinking of his work, so good. 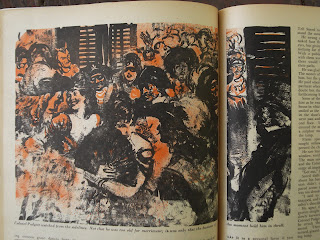 I just love Fulton's dry Brush technique and I like the use of color too, it adds some depth to the black and white drawing.  I like to think that Fulton added the color, but suspect that they had a color guy or gal doing that.  Check out his women, especially the one with the fan in the foreground, man that's good!  I've read, I think in the Mike Ashly story of Blue Book in Pulp Vault #14 that Fulton was fazed out because he had an old fashion style, whoever thought that was a good idea, I will never know, these drawing he did are fantastic, and will never be anything but outstanding in the world of illustrations, IMO. Be sure to check out his Facebook page his grandsons have put up for him, some great information and a photo of him working at a painting can be seen there.

Next time the rest of the pulps from the very same store....all at a buck a piece!
Posted by Jonathan G. Jensen at 8:01 AM