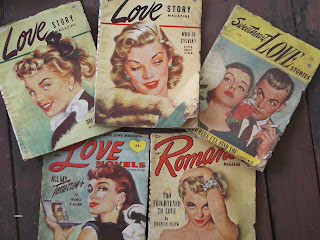 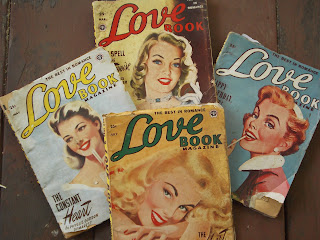 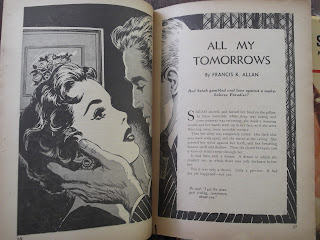 OK, I know what your thinking, man, Love pulps, but 'cha know pretty good reads and I was attracted to one of my favorite writers for Dime Mystery Francis K.Allan. He had one novel in Love Novels April 1954, called All My Tomorrows.  Which to me sounds like a soap opera.  But the story which I had to read was very good, about a singers agent finding his best singer on the porch of his building.  But, she has a secret of course.  Allan's stories in Dime Mystery would have had a weird twist, but this one turns out  well.  And, oddly enough, I find that looking at the Fiction Mags site that he has another name he writes under, Joe Kent, and he has another story in the same issue, The Girl He Wouldn't Believe.  The illustrations on the Tomorrows story is excellent as you can see, and to me, it looks like Gerald McCann, he did a lot of fine drawings for early 50's Ranch Romances and for some reason Vince Colleta comes to mind here too. He did a lot of romance comics with ghost pencil guys.  I dunno, looked at Who's Who and doesn't say much about pulp art, but he did work at Better Pubs, probably on the comics end doing Popular Romance and Thrilling Romances in the 50's.

I do like the cover art very much here also, not only wonderful art, beautiful women, and all unsigned, which must have been Popular Pubs way of doing business.  They more likely didn't want other publishers to steal away thier talent.  Its amazing to me that these are all Popular mags, they must have had great distribution in this area, I run across their western pulps all the time too.  On the other had, I don't run into Popular's detective, mystery or adventure pulps in the real world much.  I suppose I wouldn't get them for a buck each anyway. 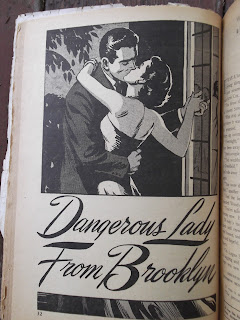 Francis K Allan had another good story in this last batch of pulps, Dangerous Lady from Brooklyn, about an ex-sports star turned editor who helps a girl with unusual ideas of traffic control. Nice read and good art and title lettering.

I notice that Agnes Best Nafzinger has a story, The spell of Turquoise in the March 1954 issue of Love Book, its a novel cover featured.  Seems as if she is a relative of Ray Nafzinger, as she writes with him on several stories  in Colliers and Saturday Evening post.  She writes in Love Book on her own, and most of her stories for Ranch Romances. Another reason, I think that can link the two of them together is that Ray lived in New Mexico and the Turquoise story made me put 2 and 2 together, OK, it may not have anything to do with that, but interesting.  Always good mystery stuff going on in the pulps!
Posted by Jonathan G. Jensen at 9:15 AM