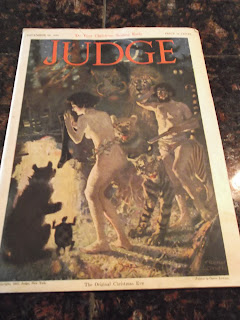 I ran across these 8 issues of Judge at a flea market a few weeks back, and although not much on the pulp magazine side, some really awesome illustrations like this one from Orson Lowell from the  Dec. 16 1922 issue, the feature is The Original Christmas Eve.  Beautiful painting by Lowell, gotta love naked Eve with a clothed Adam.  Lowell was born in 1871 and lived until 1956, most of his work was for Judge, Life, American Girl, around the turn of the century.  He had an excellent pen and ink style, like Gibson and James Mongomery Flagg, but I think he was better than both.  His work had got some humor and warmth to it.  Here is an example of his pen and ink style from March 10 1923 issue of Judge.
The caption reads: A Tired businessman between the acts of a mystery, "tell me who did it so I won't have to go back".  Beautiful work I think, anyway I have two originals on my walls here.  This issue is the mystery issue, so thats the one of the 8 I read and has some pulp ties.  The first story is by Fairfax Downey who wrote for Blue Book, Argosy, and Adventure, writes a humor piece of what happens when you take a girl to a murder mystery.  Other stories and the editorial are of the humor variety, interesting stuff.  Some other artist here, John Held, who did some excellent flapper/jazz age drawings, and James M. Flagg doing some odd humor stuff, he was better know for stuff in Good Housekeeping and the WW! poster of Uncle Sam I want you!  Poster.  Below is my original Lowell it was a piece he submitted to the Opening exhibit of the Art Center ( NY,NY), the title is Carrying the City Fashions back to Hickory Center.  Looks to be a humor spot possibly from Life Magazine, its huge, 3 x4 FEET! Done on two pieces of paper.  Very cool, too bad the photo is so-so.  Its amazing the detail he gets from a pen!  Finally at the bottom is a nice cover for the July 14 1923 cover for Judge, its by Robert Patterson, he did work for Life and French Vogue, he studied as did Lowell, at the Art Institute of Chicago, very stylized stuff and a wonderful cover artist.  Any of you have opinions on these wonderful illustrators? 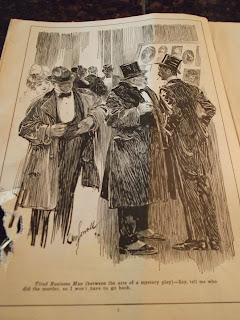 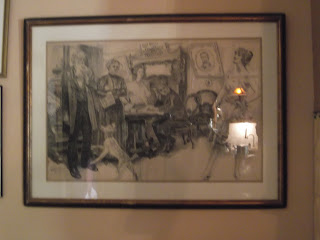 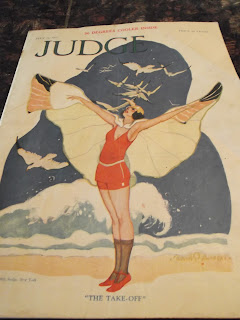