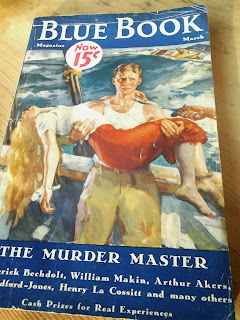 I've always liked Blue  Book, most of the ones I've turned up at Flea Markets and Antique Malls have been the larger bed-sheet size issues, that's the 8x10 inch regular size magazine issue's.  Wonderful issues and generally pretty reasonable, from Free to 3, 4 bucks.  This one is more the pulp size issue, with OMG trimmed edges!  Yeah, am a sucker for those, you can actually page though the issue, unlike all the other pulps of its ilk, with rough edges.  They still crumble the same when you read them, mostly over my jeans or the bed depending where you read the things.  This one I picked up from a friend in trade for some other books, he had about 5 or so of these, plus other pulps.

This one has a great Joe Chenoworth cover, who was from Indiana, went to the Chicago Art Ins. ( and taught there also), worked for McCall's (who was BB's publisher) which may have helped him get a job at Blue Book. A wonderful source of material on pulp artists is Pulpartists.com, its one of my favorite sites.  I really like his design on this cover, the W shape of the woman, the male figure intersects this and the shape of the land brings the whole thing around again to the figures, very nice.  I would have bought it, in the day.  The cover story is about the H. Bedford-Jones story "The Pearl of Price", 1500 miles south of Honolulu, pearls are found on a little charted reef and rats too!  A woman is found adrift with 2 dead men, a girl on a ship is found to be the "Devils Luck"!  Great story by Jones as usual.  I really find the novelette length stories are the best in a pulp, gives enough pages to suck you into.

The first story is "Power Smoke" by Roy Norton a very prolific writer of general fiction for Popular mag as well as many others.  Tells a modern western tale, mixed with Chicago style gangsters.  A decent short story of Deputy Bill Adams holding the mine down for the good guys.

One of my favorite stories contained here is "The Chief Engineer" by Bigelow Neil, a wonderful tale of a beaver and how he helps the humans.  Great teller of animal tales.  Looks like he spent his whole writing  career at Blue Book.  You couldn't go wrong writing for them, they paid very well, even in the thirties.

"Knave of Diamonds" by Henry LaCrossitt and very well done illo's by Joe Chenoweth.  The story is a good one an how a thief steals some diamonds and how they end up in the least expected place.  Seems he wrote a lot of stories, for Adventure, Complete, Sat. Evening Post and of course Blue Book.  Romantic adventure seems to be his ticket.

"Breakers Away" bu Frederick Bechdolt a well told yarn about Chineese human contraband.  An unusual choice of story matter.  Very  well done.  He wrote for everyone, Sat. Evening Post, Cosmo, Liberty, and lost of pulps.  He did very well for himself, I would think.

"Flying Justice" by Sidney Bowen a flying and sports writer, in the pulps, puts out a tale of a pilot and bank robbers.  He wrote a lot of pulp material and Blue Book was not left out of this.  The illo's by George Wert, is another blog entirely, so will get back to him soon.

"The Secret of Zorga Island" by Wm J. Makin a Red Wolf of Arabia story and a top notch spy tale.

"White Owl Milk" by Akers is a rather racist story, he wrote a lot of them for Blue Book, well told though...

"Abducted Premier"  a Freelancers of Diplomacy story by Herbert New a regular feature like the previous 2 tales.

"Murder Master" by Roy L. Hinds the featured novel in the issue is a very smooth tale of oriental murder, he's a terrific  storyteller.  He did tons of work at  Popular, Short Story and Argosy.

All very accomplished professionals in the prime of their writing lives, this makes for a very well spent 15 cents back in the day, OK, so I spent  15 bucks on this deal, but still a very great value.

While picking out something to write about pulp-wise, you can't help looking at the covers.  Yeah, back in the day I would have bought a ton of these things just for the cover.  Here's a good example from Populars line of Dime Mystery, this is the ones that came after the name change to 15 Mystery Stories. 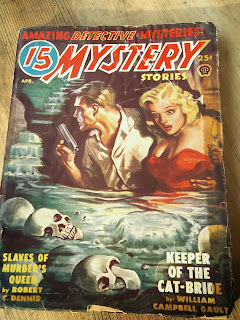 I think the cover is by Sam Cherry, its a classic.  The novel in the mag is William Campbell Gault's Keeper of The Cat-Bride,  a very good tale in my opinion.  I find most everything he did here and in Dime Mystery to be unique and well written. 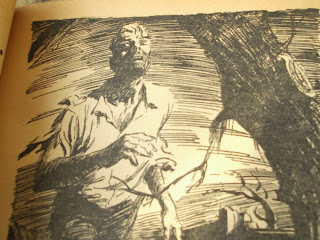 Interior art pretty cool also, I don't know who's the artist, but nice. 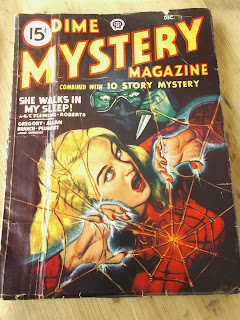 Another classic pulp cover this time for DM, this time I think its Stan Drake he used this model a bunch of times, maybe his wife.  The novel in this issue I thought was the strongest story, it by Franklin Gregory and the title is Once in a Murderer's Moon.  He wrote some in DM and his output at this time was mostly in Adventure and Blue Book.  I also like the story Dark Inquest by Cyril Plunkett who was a very prolific writer of detective fiction writing for everyone it looked like in the pulps and a bunch for Popular, New Detective, Detective Tales DM, etc. 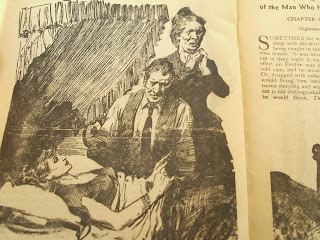 An interior drawing from DM, looks to be either Everett Raymond Kinstler or Gerald McCan, they are oddly similar in style sometimes.  Both of their bio's can be found at Pulp artists field guide.

So, if I was browsing the racks back in the late 40's early 50's, I would positively snag these 2 issues!  OK, well if I had the dough 15 to 25 cents a pop, I would have bought doubles of each for trading purposes later, just like buying doubles of all #1 issues.  An old comic book deal.  Anyone else do this?