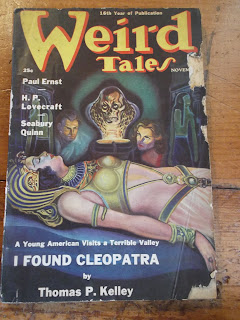 As you can see I'm ready for some horror stories and most of all the H P Lovecraft stories contained in Weird Tales for Nov. 1938. Its a reprint from the Wolverine Nov. 1921 a fanzine out of Detroit, MI.  I look forward to the other stories as well, including: The Hound of Pedro by Robert Bloch, Lynn Foster is Dead by Seabury Quinn, The Thing in the Trunk by Paul Ernst and even a Robert E. Howard poem!  Can't beat the A R Thileburn cover of  I found Cleopatra by Kelley, too bad its only PT. 1.  OK, it was a find I made in an old store, and no not for 5 buck either, but a good trade for some Good House Keeping from the 30's and some other comics as well.  I got about 30 pulps, including these 2 Weird Tales.

The next issue, March 1938 has a fine M Brundage  cover, and some awesome interior illo's, especially for the Jules de Grandin story by Seabury Quinn, and is the cover feature as well.  The Lovecraft story is Beyond the Wall of Sleep, and contains a ton of other great material such as:
The Ancient Mariner an illustrated poem  by Virgil Finlay, a Robert E Howard poem, The Thing on the floor by Thorp McClusky, Dreadful Sleep by Jack Williamson, Shadow on the screen by Kuttner.  Great tales of wonder if you ask me.  What are you all gonna read for the Trick or Treat season?
Posted by Jonathan G. Jensen at 7:57 AM 2 comments: 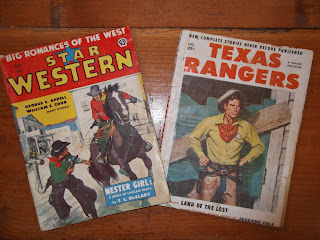 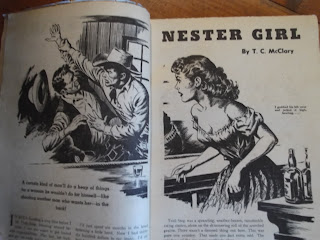 Here's some real world finds that I located out in W.Virgina one my way home, nothing too exciting, but to me I find lots to dig into when I get new stuff, as I'm sure you all do too.  The Star Western is from Feb 1954, the cover artist is unknown to me, one thing to notice is above the title is Big Romances of the West, kind of sets the tone of the issue.  As you can see from this fine illustration that these are not your push over women, like my wife says "built to pull plows".  The second story by Dan Kirby, Night Rider, has a opening blurb to the effect of "Outlaw Jack McCord wanted a slim, Blonde, lovely Melissa more than anything.  And, Like everything else, he has to get her away from another man---at the point of a gun!"  The next story by William E Cook The Failure, has a opening line: "There was only one place a man could trust that double-crossing daughter of hell Dan Keene pursued--smug and tight and helpless--in somebody else's arms!"  I see a pattern of the kind of stories you or I are going to read. 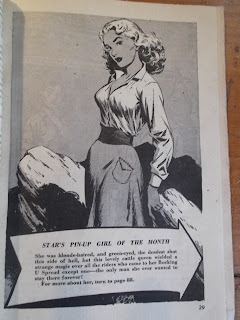 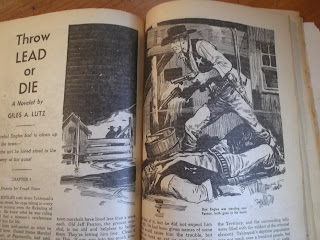 And here too, is something that I don't see everyday in a pulp mag: The Cattle Queen Pin-up!  Very cool, I must say, a lead into Lee Floren's Cattle Queens Die Proudly!  Finally, my favorite artist over at Standard pubs in the Dec. 1952 issue of Texas Rangers Gerald McCann who illustrates Giles A Lutz' Throw Lead Or Die. I haven't read any of his work, but look forward to that one.  The lead off story of the Rangers is by Peter Germano writing under the Jackson Cole name, the story is Land Of The Lost.  Other stories are by Robert Horton with the Wedding Gift and Gordon Shirreffs' Face of Fear. The cover by Sam Cherry is a classic boarding of the bat wings!  Over all a nice find, look forward to some more reading.
Posted by Jonathan G. Jensen at 5:54 AM 6 comments: