I'd like to start out my blog with a find I made at the local Flea Market several years ago.  It was about 150 or so issues of Western Story Magazine form about 1925 to 1930 or so.  Wonderful covers and even more amazing stories.  From Max Brand to Johnston McCulley, some of the best reading you can find.  I picked up several of these mags at the Flea and asked if they had more, and go figure, they did.  So went out next week and you should have seen the kitchen table filled with stacks of Western Story, fantastic covers abounded. I've read many of these and found that in the Feb 11, 1928 issue,  D C Hubbard started writing articles about famous western writers. That issue featured George Washington Ogden.  That one was missing from the collection I bought, but, the next issue March 3, 1928 was present and featured Roland Krebs, Who seemed to be the master of the short humor story for WSM, he started out in Argosey 1923, went to Detective Story 1924, graduated to the slick, The Saturday Evening Post for 1925 and 1926, and then hit off a long relation with Street and Smiths WSM, until 1936.  He had a few issues of Popular and Complete pulps also form S&S toward what seems to be the end of his writing career for the pulps, 1937.  But, from Krebs' interview  of which I post here, with a nice drawing of him also, he lived a very interesting life as an artist, reporter ( in St. Louis), and at the time of the article was living in the Ozarks of Mo.in a cabin of some sort.  Says he gets inspired from newspaper articles he reads and goes from there! 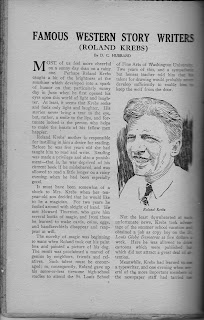 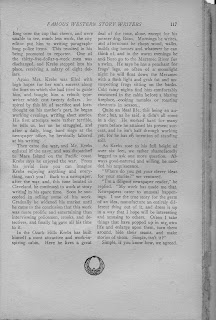 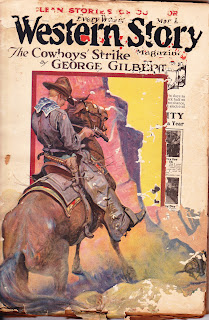 His story in the March 3rd,1928 issue is a good one, all of 3 or 4 pages and talks of free lunch at a prohibition bar in Montana.  You have to love an up to day western story, really a pretty neat story of cowboys, food and near beer!

Over all the articles seems to promote the writers in the magazine, but gives them a human face instead of a name on the cover, which to me I find very interesting.  The are about 12 more of them, the next issue, March 24, 1928, featuring Clem Yore interview, writers Austin Hall( Silvertip), Ray Humphreys(Shorty McKay)  and others, great reading.

Next up would like to talk abut the Spicy Mystery I'm reading, especially one of the interior artist  contain there in, and like to talk about food, trucking, comics, illustrators and what all ever comes to mind!
Posted by Jonathan G. Jensen at 9:32 AM 4 comments: