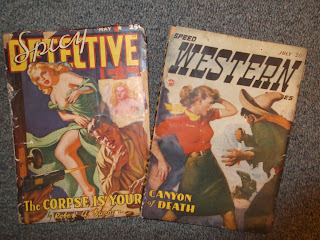 Two recent reads mine are the above pictured pulp magazines of the Culture group, sometimes known as Trojan Publishing.  Trojan also published one of my favorite lines of 50’s crime and horror comics.  Being they printed some of the best gory and violent group of comics a guy could want!   The pictured pulp of an early nature: the Spicy Detective dated May 1941 a scarcer issue of that series and a later publication of theirs: Speed Western July 1947.  For you guys and gals who read pulps you know that this was a publisher out to fill a part of the buying public that was of an adult nature.  So, OK, your kid goes into buy a comic or pulp, say Doc Savage and the dad goes with him and gets a little something for himself to read, and asks for a Spicy.  Mostly, these were under the counter items, so you got a Spicy Mystery, Detective, Adventure or whatever you liked.   Cool, now you got a piggy-back sale, like selling a candy bar with you comics or pulp purchase.  More dough, yah know?  Anyway down the line Culture got cracked and had to tame down their line and renumbered and renamed their line Speed, hence the Speed Western from Spicy Western.  Oddly, enough at least in the Speed Western case no more “sex” but pretty violent for a western.  An example of both of these early and late series pulps would say be from my favorite detective writer Robert Leslie Bellem, the story is called Future Book a horse racing tale of a bookie who takes bets on future races ( weird, I know).  It’s a tale of Dan Turner Hollywood Detective.  To quote Dan ( and, ladies I’m sorry about the politically incorrect line, but its funny) “When I spoke to her, she drew a quavery (sic) gasp that swelled the front of her suede jacket in a most distracting way!”  Alright, kind of quaint, but, you get the idea about Spicy.  As for the Speed side, from Frontier Law by Paul Hanna: “Allan’s hand shot up and grasped that thumb, and the crack of the broken bone sounded though the room.”  Ouch, not something I’d find in a Western Story mag. yarn ( The cover quote: is stories as clean as the outdoors).
Let's talk about the artists with Culture Pubs.  The cover to the Detective is by Allan Anderson.  It’s a very nice design, the way the two people lean to the left and the door on that side brings the eye around over to the gun and back to the characters--a classic triangle design, good drapery and a nice on the eyes female.  An excellent cover made to sell.  The Western is by George Rosen, not a slouch in the cover painting department.  Notice the arms on the female and male that make the eye keep looking at the scene, a nice rectangle.  Makes me want to know what’s going on in the magazine.  And as for what is inside, well some very good pen and ink drawings by Parkhurst and Joe Sokoli.  Sokoli, had a relationship with the guys at Culture in a round about sort of way, which I find interesting to no end.  I read a very nice article in Illustration magazine here by David Saunders which is very long and detailed and he has the sweetened and condensed version at his very excellent Field hunters guide to Pulp Artists here.  To paraphrase some of that, Joe lived the life of the Dead End Kids ala Jack Kirby ( who did some pulp illo’s and created some character name Captain America with Joe Simon of course).  His father was a barber to many famous people, including Wild Bill Hickock, President Woodrow Wilson and a guy named Frank Costello, a gangster and a good tipper!  Joe went to Pratt to get an engineering degree, but switched to art, because of the great depression ( 1932), where the alumni of the school were making big bucks.  The teachers included, Walter Baumhofer, H. Winfied Scott, Rudolph Belarski, Fred Blakeslee, and John Flemming Gould.  They all returned to Platt to tell others how to break into the pulps.  The students included: Earl Mayan, George Gross, and Sokoli.  Seems as if Joe’s father died and at the same time the gangster Frank Costello comes in the Culture game with partner Harry Donenfield, Costello being the silent partner.  So, Joe needs a job…A last note on Donenfield is how what Dave says he may have made his money to buy National (later to merge into DC Comics) was by smuggling Canadian booze into the US in the hollow of the paper rolls he used in publishing his Spicy’s.  Just a rumor! 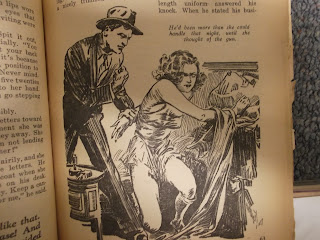 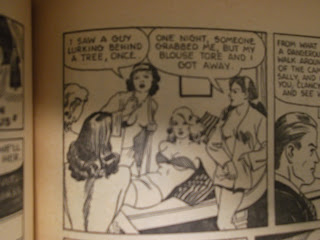 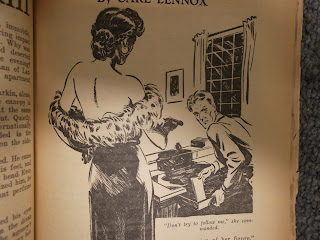 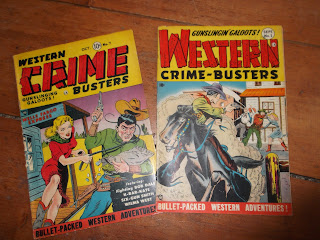 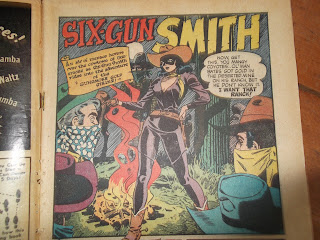 Ah, now the writers had just a little to do with the mags, in Speed Western , Walter A Tomkins with Spawn of the Trigger Breed a story of a father’s rep and what happens to his son, good tale.  John Jo Carpenter, Laurence Donovan a great story on bringing Morgan horses west to sell.  William Decater, Paul Hanna and Joel McCoy about Mexico’s war with Texas, very cool.  The Spicy Detective has Luke Terry, Robert A Garron, Robert Leslie Bellen who has the destination of writing for most all the issued of Spicy Detective, Max Neilson, Carl Lennox, Walton Grey, Stan Warner and Paul Hanna again.  A lot of these guys used other names when writing here in the Spicy’s for whatever reasons.

And Without a doubt, Culture Publications is one of the most interesting houses of the Golden Age of pulps, comics and other material.  Just scratched the surface here, more to be read!


And Without a doubt, Culture Publications is one of the most interesting houses of the Golden Age of pulps, comics and other material.  Just scratched the surface here, more to be read!

The above comics are notable for the way the title changed from the #1 issue with  emphasis on the Western to the Crime issue #7 and the Wally Wood Art on Six Gun, great stuff hey?  The Sally  art  on top of the Joe S. art is by Adolphe Barreaux , who is also listed as editor on the comics line, so he too was connected with Culture pubs. too.