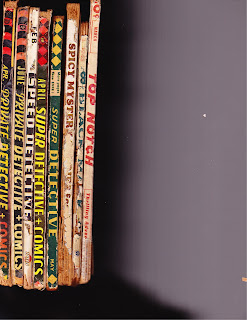 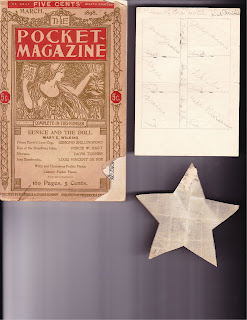 I was listening to NPR the other day and they were reviewing books and the one that stuck me was called Forgotten Book- Marks. A booksellers collection of odd things lost between the pages.  Its a photo collection of cool stuff left in old books plus the books they were left in.  I think the most unusual thing he found was razor blades and 2 tickets to a 1904 masquerade ball.  So, the odd thing I found in a magazine I picked up was gotten a few years back at a Flea Market here in Wisconsin.  It was a copy of The Pocket Magazine March 1898, a paperback size, 100 page, 5 cent magazine.  In it I found two nice bookmarks, a star with a name on it  ( Lillian something) and what looks to be a hotel plan with who was going to room with whom, one of which is Lillian, on the back it says "be grateful for this."  Not sure anymore which story they were stuck in.
The five stories are:
Eunice and the Doll by Mary E Wilkins
Prince Pavio's Love Cup by Osmond Shillingford
Key of the Broadway Gate by Percie W Hart and excellent historical fiction of New Amsterdam, NY He wrote in Sea Stories, Munsey's and other pulps as well, this tale would have in any of those mags as well.
Nirvanna by Davis Turner
John Esterbrooke by Louis Vincent DeFoe Which is an early story of an Englishman in the old west, excellent story.  It appears he was a drama critic, and editor of the Chicago Tribune.  He also wrote  for The Red Book a pulp magazine from 1907 to 1913, mostly articles but some short stories.  He was as I said, a very fine teller of tales of the west.  His story would have fit in any of the days western pulps.

So, any of you find any neat bookmarks, there must be a ton of  things that have been found, I always look for money as a bookmark, but no dice!