Here is a really unique item I ran across in The Richmond Bookstore, Richmond, VA and a cool story to go with it. 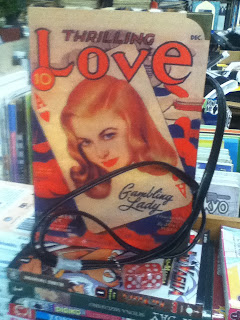 OK, its a purse, it has two clapboard images to it, the back was a bra ad or something.  It has the strap, clasp, and sides that made it about 3 inches wide inside and really looked professionally done, never seen one of these things before.  I really like the idea of including the dice with the Gambling Lady cover!  Bob the owner of the store and a buddy of mine tells me that when he was at one pulp show or another and I think it was the one in New Jersey that a guy came up to him and was interested in romance pulps which Bob had a bunch of, but not with him.  So the guy buys what he has, tells him about using them for woman's handbags, and he never hears from him again.  Well Bob shops everything from Fleas to backyard sales and right in Richmond, runs across 2 of these things, at a yard sale, the other one wasn't a pulp cover, but had the same 7 x10 image from another mag.  He couldn't remember if this was one of the pulps he sold to the guy in New Jersey, and Fiction Mags does not have it in that site either.  There are 3 or so Gambling Lady titles, one by Frank Gruber no less, but not this cover.  The cover image looks to me like it should be the 1950's, but the 10 cent price tag seems of question for a 50's pulp.  So it could be a composite image, even if it is its a nice one. And, no I did not buy it, if anyone wants it, its still there I would think.